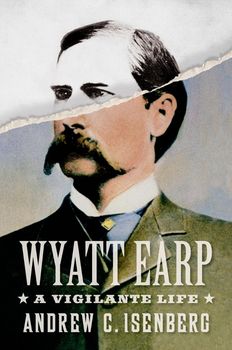 As Andrew C. Isenberg shows in Wyatt Earp: A Vigilante Life, the Hollywood Earp is largely a fiction created by Earp himself, whose life was characterized not by an unflinching devotion to law and order but by inconstancy, defiance of authority, and repeated self-invention. The Earp played on-screen by Henry Fonda and Burt Lancaster is stubbornly duty bound; in actuality, Earp led a life of impulsive law-breaking and shifting identities. When he wasn’t wearing a badge, he was variously a thief, a brothel bouncer, a gambler, and a confidence man. He spent his last decades in Los Angeles, where his plastic identity and his penchant for reinvention freely lent themselves to Hollywood mythmaking. Befriending Western silent-film actors and directors, he presented himself to them as a lawman singularly committed to justice. Having tried and failed over the course of his life to invent a better future for himself, in the end Earp invented a better past. Though Earp, who died in 1929, did not live to see it, Hollywood’s embrace of him as a paragon of law and order was his last and undoubtedly greatest confidence game.

In American popular culture, Wyatt Earp, a law officer in nineteenth-century Dodge City and Tombstone, is an icon of justice. The subject of dozens of films, his memory has been invoked in battles against organized crime (in the 1930s), communism (in the 1950s), and Al Qaeda (after 2001).