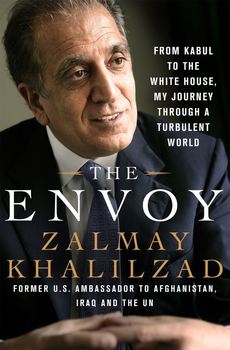 The Envoy: From Kabul to the White House, My Journey Through a Turbulent World

Zalmay Khalilzad grew up in a traditional family in the ancient city of Mazar-i-Sharif, Afghanistan. As a teenager, he spent a year as an exchange student in California, where after some initial culture shocks he began to see the merits of America's very different way of life. Of course, the 17-year-old never imagined that he would one day be in a position to advance such ideas.

With 9/11, he found himself uniquely placed to try to shape mutually beneficial relationships between his two worlds. As U.S. Ambassador to Afghanistan and Iraq, he helped craft two constitutions and forge governing coalitions. As U.S. Ambassador to the UN, he used his unique personal diplomacy to advance U.S. interests and values. In The Envoy, Khalilzad details his experiences with candid behind the scenes insights.

Part memoir, part record of a political insider, and part incisive analysis of the current Middle East, The Envoy arrives in time for foreign policy discussions leading up to the 2016 election.

From northern Afghanistan to Washington's corridors of power, the memoir of the most influential and highest-ranking official of Muslim descent to serve in the U.S. government.