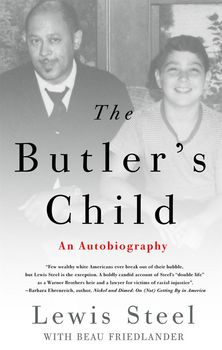 The Butler's Child: An Autobiography

The Butler's Child is the personal story of a Warner Brothers family grandson who spent more than fifty years as a fighting, no holds barred civil rights lawyer. Lewis explores why he, a privileged white man, devoted his life to seeking racial progress in often uncomprehending or hostile courts. In fact, after writing a feature for The New York Times Magazine entitled "Nine Men in Black Who Think White," Lewis was fired from the NAACP and the entire board of the NAACP resigned in support of him. Lewis speaks about his family butler, an African American man named William Rutherford, who helped raise Lewis, and their deep but ultimately troubled relationship, as well as how Robert L. Carter, the NAACP's extraordinary general counsel, became Lewis' mentor, father figure and lifelong close friend.

Lewis exposes the conflicts which arose from living and working in two very different worlds - that of the Warner Brothers family and that of a civil rights lawyer. He also explores his more than fifty year marriage and love of Kitty Muldoon, how they raised their three children, as well as their efforts to bridge two very different Jewish and Irish American families.

Lewis' work with the NAACP set civil rights law and legal precedents still at work today; The Butler's Child is also an insider's look into some of the most important civil rights cases during the turbulent 1960s.

Born into Hollywood royalty, Lewis Steel learned about real life from the family's butler. In time, he became a leading lawyer for the NAACP and the Civil Rights struggle.