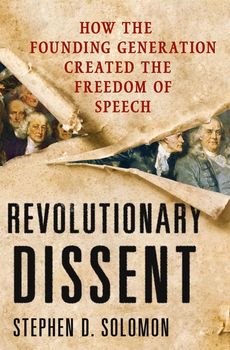 Revolutionary Dissent: How the Founding Generation Created the Freedom of Speech

When the Framers of the Constitution developed what we call today the Freedom of Speech, they didn't realize they would be setting a foundation for the American political character we know today - raucous, intemperate, and often mean-spirited. This character is not limited to contemporary political discourse, as we so often assume. Revolutionary Dissent brings alive a world far more complicated than the history we're all familiar with suggests, giving a clear picture of just how imprecise the Framers were about what such freedoms actually meant. Solomon explores through a series of chronological, advancing narratives how Americans employed robust and colourful expression as they debated separation from England and creation of a new system of government. Uninhibited protest provided vital meaning to the First Amendment's guarantees of freedom of speech and presses at a time when legal doctrine offered little protection from government prosecution.

Revolutionary Dissent shows that the roots of the careers of satirists like Jon Stewart and Stephen Colbert and pundits like Rush Limbaugh and Keith Olbermann, and the acts of flag burning, draft card destruction, and sit-ins like Occupy Wall Street, lie in the Revolutionary period's inflammatory engravings of Paul Revere, the polemics of Thomas Paine, and the symbol-laden protests again the Stamp Act. This is truly a revelatory work on the history of free expression in America.

From Rush Limbaugh to Michael Moore to smear tactics by political opponents, this is the story of how the Founding Generation conceived the right to free expression for all Americans.