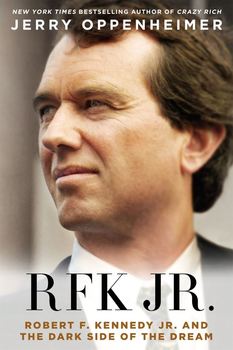 RFK Jr.: Robert F. Kennedy, Jr. and the Dark Side of the Dream

Robert F. Kennedy Jr. inherited his assassinated father’s piercing blue eyes and Brahmin style, earning a reputation as the nation’s foremost environmental activist and lawyer - the “toxic avenger” - battling corporate polluters. But in this, the most revelatory portrait ever of a Kennedy, Oppenheimer places Bobby Jr., leader of the third generation of America’s royal family, under a journalistic microscope, exploring his compulsions and addictions - from his use of drugs to his philandering that he himself blamed on what he termed his “lust demons,” and tells the shocking behind the scenes story of the curious events leading to the tragic May 2012 suicide of his second of his three wives, mother of four of his six children. If his late cousin JFK Jr. was once dubbed “Prince Charming,” RFK Jr. might have earned the sobriquet, “The Big Bad Wolf.”

Based on scores of exclusive, candid on the record interviews, public and private records, and correspondence, Jerry Oppenheimer paints a balanced, objective, but often shocking portrait of this virtually unaccounted for scion of the Kennedy dynasty. Like his slain father, the iconic senator and presidential hopeful, RFK Jr. was destined for political greatness. Why it never happened is revealed in this first ever biography of him.

From New York Times bestselling author Jerry Oppenheimer comes a sensational biography of the son of the legendary Senator and troubled standard bearer of America's most fabled political dynasty.