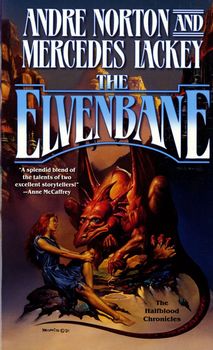 Possessed of great magical abilities, the Elvenlords can change the very world around them to suit their will. They rule their human slaves with an iron hand but they also fear them. According to an ancient prophecy, one day the Elvenbane - a person half-elf and half-human will be born, and the elvenlords will be overthrown.

Neither the elves nor the desperate humans know that the prophecy was created by a third, hidden race: the dragons. The dragonkin love to secretly manipulate the elven society and they get a fresh chance when a human woman, pregnant by an Elvenlord, flees into their desert domain. Her child, raised by the dragons, is the fabled Elvenbane, a false prophecy come true.

When Shana comes into her power and steps forward to claim her destiny, the world trembles.

The Elvenbane is an exciting tale of magic and politics, involving humans, elves, and dragons written by two masters of fantasy!