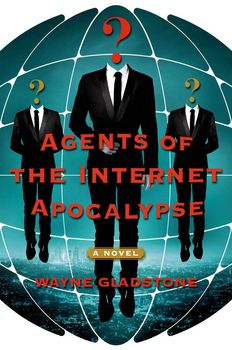 Agents of the Internet Apocalypse

Gladstone, the so-called "Internet Messiah," has not only failed to bring back the Web, but his search has landed him in a New York City psychiatric ward. The rest of the world isn't doing so well either, filled with disconnected Internet users still jonesing for a fix, and an increasingly draconian Government, interrogating and detaining anyone deemed a "person of interest" under the NET Recovery Act.

For Gladstone, however, finding the Net is less important than heading to Los Angeles to win back his ex-wife. He takes up residence on the couch of his old friend, gossip-blogger Tobey, while trying to rebuild his lost romance. But when Gladstone's old journal account of the Internet Apocalypse goes "paper viral," his newfound celebrity puts him at the forefront of the Internet Reclamation Movement. Soon he is a target for shadowy government agents, and a reluctant collaborator with Anonymous who provides a clue that promises to explain the Internet's disappearance.

A sharp-tongued social satire of a dystopian world without the Web from Cracked.com writer Wayne Gladstone