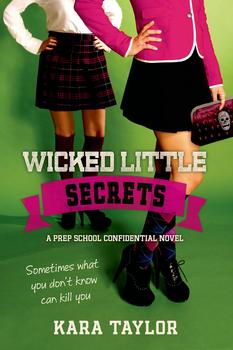 Anne Dowling—a fresh, original, and funny new YA heroine whose knowing, irreverent voice will remind readers of Pretty Little Liars and Private—is back for her second semester at Wheatley Prep.  Although things have settled (somewhat) since her roommate Isabella’s death, Anne's still kind of obsessed with the death of Wheatley student Matthew Weaver thirty years ago, since she found a picture of him and his crewmates with the words “they killed him” scrawled on the back among Isabella’s things.

When Anne learns that her boyfriend Brent’s dad is one of the now-powerful Wheatley alumni who rowed crew with Matthew, and that the crew team continues to induct new members with a creepy-sounding ritual called “The Drop,” she knows further investigation could put her relationship with Brent in danger.  Determined to discover the truth, she reaches out to Anthony, Isabella’s townie brother, who helps her delve deeper into the secrets in Wheatley’s past. Secrets someone would kill to keep hidden.  As the school’s Spring Formal—and its notorious after party—approaches, Anne sees the perfect opportunity to do some off-campus digging into the lives of Wheatley’s VIPs in this thrilling, unputdownable read—but if she’s not careful, she’ll be the next student who never comes back.

Anne Dowling becomes entangled in a web of secrets involving a missing student and a conspiracy at Wheatley Prep in this fast-paced, juicy follow-up to Prep School Confidential