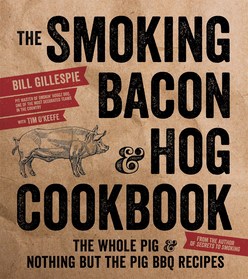 The Smoking Bacon & Hog Cookbook: The Whole Pig & Nothing But the Pig BBQ Recipes

The Smoking Bacon & Hog Cookbook is the ultimate guide to get you cooking the most delicious pork you and your family have ever tasted including 35 bacon curing recipes. Bill Gillespie is the pitmaster of the award winning Smokin' Hoggz BBQ; in his second cookbook, he reveals all the trade secrets of preparing pork meat and the recipes that made his BBQ team the Grand Champions of the Jack Daniel's World Champion Invitational Barbeque and the American Royal Invitational from smoked bacon and sausage to barbecued baby back ribs, pulled pork, tenderloin and the classic ham. He shows the ins and outs of curing, smoking and cooking each cut of the hog to delicate perfection every time. You'll be amazed to see how easy it is to smoke and cook pork so tender and delicious you won't be able to stop talking about it.

Readers are guided step-by-step on how to prepare each of the most popular parts of the pig. The more adventurous learn to prepare the head and whole hog. Readers also get an introduction to cooking with a variety of cookers and smokers. The Smoking Bacon & Hog Cookbook, with its simple yet masterful recipes, will have any pork lover drooling over its pages, so you'll want to be sure to get one for yourself and a friend!

Cook the best pork of your life with recipes and techniques from a BBQ world champion.