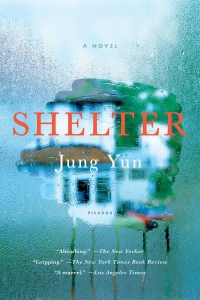 Kyung Cho is a young father burdened by a house he can’t afford. His debts have always seemed manageable, but lately they’ve spiraled out of control, and he is worried for his family’s future. A few miles away, his parents, Jin and Mae, live in the town’s most exclusive neighbourhood, surrounded by the material comforts that Kyung desires for his wife and son. Growing up, they gave him every possible advantage, but never kindness nor affection. Now, Kyung can hardly bear to see his parents, much less ask them for help. Yet when an act of violence leaves Jin and Mae unable to live on their own, the dynamic suddenly changes, and he feels compelled to take them in. Once more under the same roof, Kyung is forced to question what it means to be a good husband, father, and son, while the life he knew begins to crumble and his own anger demands to be released. As Shelter veers swiftly toward its startling conclusion, Jung Yun leads us through dark and violent territory, where, unexpectedly, the Chos discover hope. Shelter is a masterfully crafted debut novel that asks what it means to provide for one's family and, in answer, delivers a story as riveting as it is profound.

• Longlisted for the Center for Fiction First Novel Prize

• For readers of Celeste Ng and Lauren Groff

Buzzfeed's #1 Most Buzzed About Book of the Year (So Far), "Shelter is domestic drama at its best" (Viet Thanh Nguyen, Pulitzer Prize-Winning author of The Sympathizer).