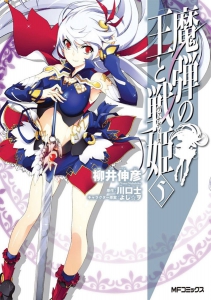 Description
The country of Brune is on the brink of civil war, and their rival Zhcted has seized the opportunity to attack. Tigre, a nobleman, is dispatched to the battlefield where he encounters Elen, one of Zhcted’s Vanadis - a group of women who fight with powerful weapons forged from dragons. While Tigre is overwhelmed by Elen’s beauty and power, Elen is impressed by his archery skills and declares that he belongs to her! Will Tigre be able to turn the tides of battle or is he now simply the spoils of war?
Previous Titles
Lord Marksman and Vanadis Vol. 1 9781626924031, Vol. 2 9781626924048, Vol. 3 9781626924376 and Vol. 4 9781626925014
Selling Points
The fantasy epic that inspired the fan-favourite anime series is now an ongoing manga series!
« Back