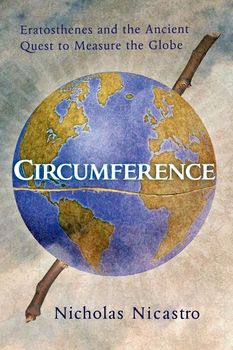 Circumference: Eratosthenes and the Ancient Quest to Measure the Globe

In one of history's greatest experiments, a brilliant Greek, Eratosthenes of Cyrene calculated the distance around the earth to a few percent of the actual size. In an inside glance at the philosophy and practicalities of this discovery, Nicholas Nicastro looks at a deceptively simple but stunning feat made by using only simple tools--a stick, a piece of string, and a shadow. But how was he able to measure the land a time when distance was a matter of a shrug and a ballpark figure of time spent on donkey-back? How could he be confident in underlying assumptions: that the earth was round and the sun so far away its rays struck in parallel lines? Was it luck or pure scientific genius? In this exciting narrative history, Nicastro brings readers on a trip into a long-vanished world that prefigured modernity where despite his reputation, validity of method, and position as head of the greatest research institution of the time, Eratosthenes was simply right too soon about earth's dimensions. His results were debated for centuries until he was ultimately vindicated almost 2000 years later during the great voyages of exploration. Luck? Apparently not.