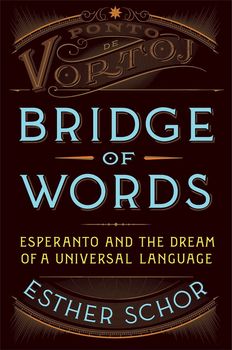 Bridge of Words: Esperanto and the Dream of a Universal Language

In 1887, Ludwig Lazarus Zamenhof, a Polish Jew, had the idea of putting an end to tribalism by creating a universal language, one that would be equally accessible to everyone in the world. The result was Esperanto, a utopian scheme full of the brilliance, craziness, and grandiosity that characterize all such messianic visions.

In this first full history of a constructed language, poet and scholar Esther Schor traces the life of Esperanto. She follows the path from its invention by Zamenhof, through its turn-of-the-century golden age as the great hope of embattled cosmopolites, to its suppression by nationalist regimes and its resurgence as a bridge across the Cold War. She plunges into the mechanics of creating a language from scratch, one based on rational systems that would be easy to learn, politically neutral, and allow all to speak to all. Rooted in the dark soil of Europe, Esperanto failed to stem the continent's bloodletting, of course, but as Schor shows, the ideal continues draw a following of modern universalists dedicated to its visionary goal.

Rich and subtle, Bridge of Words is at once a biography of an idea, an original history of Europe, and a spirited exploration of the only language charged with saving the world from itself.

A rich and passionate biography of a language and the dream of world harmony it sought to realize.