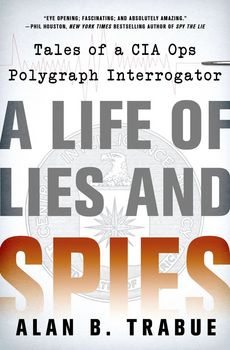 A Life of Lies and Spies: Tales of a CIA Covert Ops Polygraph Interrogator

Alan Trabue chose a bizarre, dangerous way to make a living. In A Life of Lies and Spies, Trabue exposes the often perilous world of polygraphing foreign spies in support of CIA espionage programs. He recounts his incredible, true-life globe-trotting adventures, from his induction in the CIA in 1971 to directing the CIA's world-wide covert ops polygraph program.

A Life of Lies and Spies brings readers into the high-stakes world of covert operations and the quest to uncover deceit, featuring a high-speed car chase, blown clandestine meetings, surreptitious room searches, tear-gassing by riot police, and confrontations with machine gun-armed soldiers. Liberally sprinkled with side anecdotes—such as debriefing an agent though a torturous swarm of mosquitoes in a jungle shack—Trabue's story highlights both the humour and the intrinsic danger of conducting CIA covert activities.

Writing from a unique perspective framed by his uncommon longevity and broad experience, for which he was awarded the Career Intelligence Medal, Trabue’s memoir unveils the CIA's use of polygraph and interrogation to validate recruited spies' bona fides and information obtained through their acts of espionage.