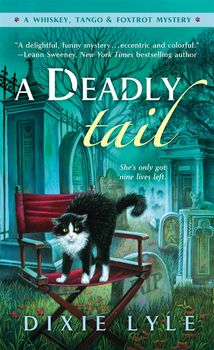 Diedre "Foxtrot" Lancaster is in new territory. Telepathically communicating with her dog and cat to solve murders? That's old hat. Having a movie filmed on the crazy and wacky Zoransky mansion grounds, and making a new commiserating assistant friend to boot? Now that's a whole new ball of wax.

Yet not all goes according to plan. The universe clearly hates Foxtrot, because now she's got a dead body on her hands, an explosion in the honey badger den, and the epic, classic film argument of the ages - who are the better actors, canines versus felines rages on between Whiskey and Tango. And to get this film, and the dead body, wrapped up and put to bed, Foxtrot is going to need her mystery-solving pets more than ever.

An animal-loving Gal Friday, a telepathic cat and shapeshifting dog end up neck-deep in their wildest, wackiest adventure yet!