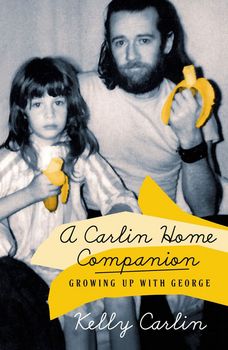 A Carlin Home Companion: Growing Up with George

Jerry Seinfeld. Jon Stewart. Lewis Black. Margaret Cho. Chris Rock. Bill Maher. Jay Leno. These comedians all have at least one thing in common: George Carlin. Truly the voice of a generation, Carlin's decades-long career spanned countless hours of material books, HBO specials, movies, and TV shows that have resonated with young and old alike. From Shining Time Station (with Thomas the Tank Engine) to Bill & Ted's Excellent Adventure, from "The Seven Dirty Words" to "A Place for My Stuff," George Carlin was an integral part of and wry commentator upon the American cultural landscape for nearly fifty years. Who among us doesn't have particular favorite George Carlin role, routine or quote? And finally, the only child of George Carlin gives readers a look behind the many persona and insight into the man holding the microphone.

Kelly Carlin was born when George was just beginning his fledgling career in comedy. She slid around the backseat of his car as he and wife Brenda drove around the country, going to what they liked to call "hell gigs." From the early days of the Hippie-Dippie Weatherman, to his experiments with dropping acid (and having to talk him down from a bad trip when the sun exploded or so he thought), to his renaissance in the nineties and aughts, Kelly had the inside glimpse into it all, and she gives readers the vivid, hilarious, and sometimes poignant peek behind the scenes of the iconic, beloved figure.

A memoir from the daughter of George Carlin "a hero to many, but a father to one" Bill Maher.