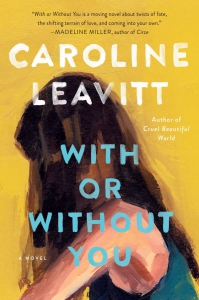 With or Without You: A Novel

Description
An up-and-coming rock musician when they first met, Simon has been clinging to dreams of fame even as the possibility of it has grown dimmer, and now that his band might finally be on the brink again, he wants to go on the road, leaving Stella behind. But when she falls into a coma on the eve of his departure, he has to make a choice between stardom and his wife - and when she wakes a different person, with an incredible artistic talent of her own, the two of them must examine what it is that they really want.
Previous Titles
Cruel Beautiful World 9781616203634 (Hardback) and 9781616207373 (Paperback)
Selling Points
After almost twenty years together, Stella and Simon are starting to run into problems.
« Back