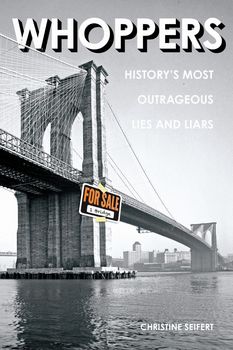 History is full of liars. Not just fibbers, or little-white-lie-telling liars, but big-honkin'-whopper-telling liars-people who have tried to convince us that even the most improbable, outrageous, nonsensical stories are true. And the worst part? We've believed them! From famous such as P. T. Barnum, who made a living off his deceptions, to more obscure figures such as Victor Lustig, who managed to "sell" the Eiffel Tower twice in the 1920s.

Whoppers tells the story of history's greatest liars and the crazy, incredible, but often quite successful stories they told.