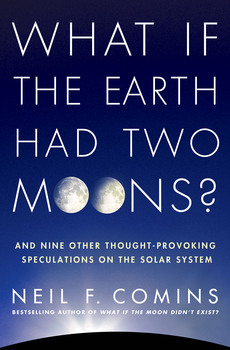 What If the Earth Had Two Moons?

“What if?” questions have always stimulated people to think in new ways. What if the Earth Had Two Moons leads us on a fascinating 10 world journey exploring what the Earth would be like if conditions in the universe were slightly different. The answer: Earth would be different, often in ways that would surprise us. The title chapter, for example, gives us a second moon orbiting closer to Earth than the one we have now. The night sky is a lot brighter, but not forever. Eventually the moons collide, with one more-massive moon emerging after a period during which Earth has a Saturn-like ring. The scenarios also shed new light on the burgeoning search for life on planets orbiting other stars.

Author
NEIL F. COMINS is a professor of physics and astronomy at the University of Maine and author of popular scientific books, articles and textbooks.
Selling Points

An astronomer conjures up stunning new versions of the Earth.