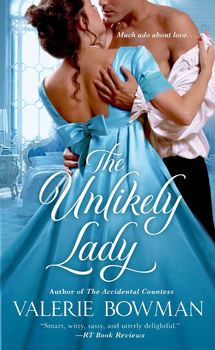 Miss Jane Lowndes is a confirmed bluestocking. She’s convinced that if she can wait out her parents’ demand that she marry, someday she can be a confirmed spinster and hold intellectual salons, her fondest dream. No man wants a bluestocking for a wife after all. And that’s exactly the way Jane likes it. In fact, she'd invented a fictitious chaperone to help her achieve that purpose.

Lord Garrett Upton is a devil-may-care confirmed bachelor. He’s lived through the war and now that he’s back in London, he intends to enjoy life to the fullest. Marriage is certainly not a part of that plan. He’s known Miss Lowndes for years and the two of them have long engaged in a war of words. Jane's latest scheme to pretend she has a fake chaperone is none of his business . . . until her desire to involve herself in a scandal becomes all too personal.

When Garrett and Jane mistakenly kiss at a wedding party masquerade, their well-documented dislike for each other is turned on its ear. And when a devious widow who will stop at nothing to have Garrett plots to keep them apart, will their desire for each other overcome their dreams of remaining unattached?