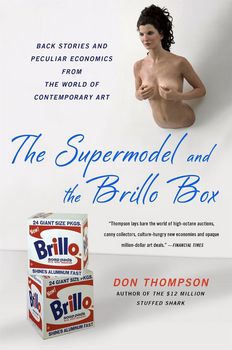 The Supermodel and the Brillo Box: Back Stories and Peculiar Economics from the World of Contemporary Art

Acquiring contemporary art is about passion and lust, but it is also about branding, about the back story that comes with the art, about the relationship of money and status, and, sometimes, about celebrity. The Supermodel and the Brillo Box follows Don Thompson’s 2008 bestseller The $12 Million Stuffed Shark and offers a further journey of discovery into what the Crash of 2008 did to the art market and the changing methods that the major auction houses and dealerships have implemented since then. It describes what happened to that market after the economic implosion following the collapse of Lehman Brothers and offers insights and art-world tales from dealers, auction houses, and former executives of each, from New York and London to Abu Dhabi and Beijing. It begins with the story of a wax, trophy-style, nude upper-body sculpture of supermodel Stephanie Seymour by Italian artist Maurizio Cattelan, which sold for $2.4 million to New York über-collector and private dealer Jose Mugrabi, and recounts the story of a wooden Brillo box that sold for $722,500. The Supermodel and the Brillo Box looks at the increasing dominance of Christie’s, Sotheby’s, and a few über dealers; the hundreds of millions of new museums coming up in cities like Dubai, Abu Dabai, and Beijing; the growing importance of the digital art world; and the shrinking role of the mainstream gallery.

A look at the contemporary art market and the economics and psychology that first produced a market crash, and then two years later resulted in astronomical prices.