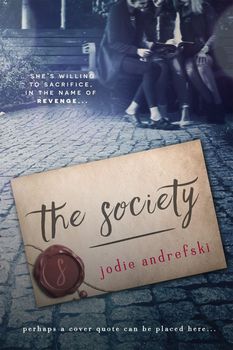 Trinity Academy's gold plated secret society is about to be turned upside down. Seventeen-year-old Sam Evans plots revenge on her ex-bestie, Jessica, who happens to perch at the top of the Society's social ladder and helped put Sam's dad in jail. Sam may no longer be cool enough to be invited to rush the Society, but she's tech-savvy enough to know how to use it in her plan.

Sam fake taps three "initiates" to do her dirty work, each none the wiser that they're merely puppets in a quest to dethrone Jessica. Convinced Sam is losing it, her best friend Jeremy distances himself, which just fuels Sam's manic personality. But after Sam meets a hot stranger in a coffee shop, she's sure the gods might finally be taking pity on her. Everything seems to be coming together - revenge, romance, respect - until she's confused by her growing attraction to Jeremy and her plotting starts to derail.

Get-backs can be a bitch, and things nosedive when Sam realises her plan isn't as flawless as she thinks and if she's not careful she could be joining her dad behind bars. With one girl hospitalised and another student in a coma, Sam is forced to re-examine her motives and decide who and what she's willing to sacrifice in the name of vengeance.

What starts as a simple revenge plot turns deadly inside Trinity Academy's gold-plated secret society, and seventeen-year-old Sam Evans must decide if vengeance is worth the price.