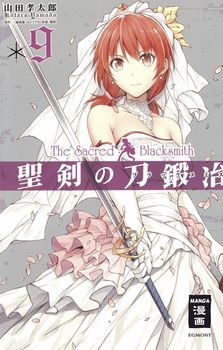 The Sacred Blacksmith is a sweeping swords and sorcery epic about a female knight and her adventures with a young mysterious blacksmith. The Sacred Blacksmith orginated as a light novel series in Japan and was adapted into a popular manga series, as well as a hit anime, which is currently available through FUNimation.

This manga is the ninth book in an ongoing series that features stunning artwork and colour inserts in each volume.

Like her father and grandfather before her, Cecily Campbell has entered the noble ranks of the Knight Guard, sworn to protect the Independent Trade City of Housman. Now the time has come for Cecily to prove herself in battle. A veteran of the great Valbanill War goes berserk in the marketplace. Cecily confronts him with the prized sword she inherited from her father and it shatters to pieces!

The Sacred Blacksmith is a sweeping swords and sorcery epic about a female knight and her adventures with a young mysterious blacksmith.