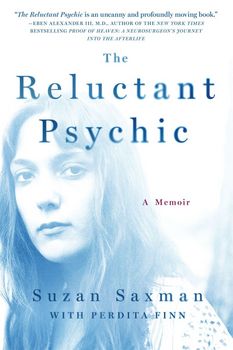 The Reluctant Psychic: A Memoir

We all, as children, saw imaginary friends and heard monsters in the closet. But for Suzan Saxman, those friends and monsters didn't go away and they weren't imaginary. They were the dead who came to her from the time she was a little girl with urgent messages for the living. Raised in a house filled with secrets, she saw and spoke the truth as soon as she could talk, alarming the nuns in her convent school with her revelations and terrifying her own mother with her strange visions. Each night she woke to see a man with no eyes watching her, and each day she kept watch by the window while her father was at work and Steve, her real father, a swarthy drifter, rendezvoused with her mother. It was the 1960s in suburban Staten Island and she tried to hide it all, and be a daughter her mother could love.

Always skeptical of her tremendous gift, she struggled to come to terms with her calling even as she revealed the destinies of everyone, from housewives to hit men, stockbrokers to rock-and-rollers. She could witness everyone's future - everyone's but her own. Why was she visited by angels and demons? Could she ever escape this strange fate? Where was her own soul mate?

Now Suzan tells the story of her journey and tries to make sense of her family's buried secrets. Through powerful readings of others' destinies interwoven with compelling narrative, a reluctant psychic emerges from the shadows.

A gripping and unsettling portal into the life of a woman who lives in many worlds, some wildly far from and some eerily near to our own — now in trade paperback.