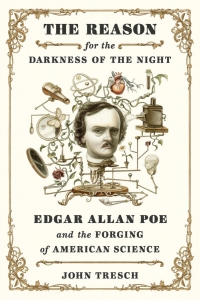 The Reason for the Darkness of the Night: Edgar Allan Poe and the Forging of American Science

Description
In The Reason for the Darkness of the Night: Edgar Allan Poe and the Forging of American Science, John Tresch offers a bold new life of one of the nineteenth century’s most iconic writers. By shining a spotlight on a time when the line between speculative endeavors and scientific inquiry was blurred, Tresch reveals Poe to have been much more than a practitioner of science fiction—in fact, he was an avid commentator on scientific developments, publishing and circulating in literary milieux that also played host to lectures and demonstrations by the era’s most prominent scientists, semi-scientists, and pseudo-intellectual rogues. As one newspaper put it, “Mr. Poe is not merely a man of science—not merely a poet—not merely a man of letters. He is all combined; and perhaps he is something more.” Beginning with his study of mathematics and engineering at West Point, and taking us through the tumultuous years leading up to publication of “The Raven,” Tresch shows that Poe nurtured a fascination with science from his earliest days as a writer. In works such as “A Descent into the Maelstrom” and “Mesmeric Revelation,” Poe explored subjects ranging from the physics of vortices to occult psychology, later turning his attention to the origins of the universe in a dazzling lecture that would win the admiration of Albert Einstein and other twentieth–century physicists. Throughout, he lived and suffered for his ideas, and remained a figure of brilliant contradiction: he gleefully exposed the hoaxes of the era’s pseudo-scientific fraudsters even as he perpetrated hoaxes himself.
Author
John Tresch is Professor and Mellon Chair in History of Art, Science, and Folk Practice at the Warburg Institute, London. He has held fellowships at the New York Public Library, the Institute for Advanced Studies, and the Max Planck Institute for the History of Science, and has been a visiting researcher at King's College London and the École des Hautes Études en Sciences Sociales. He is the author of The Romantic Machine: Utopian Science and Technology After Napoleon.
Selling Points
An innovative new biography of Edgar Allan Poe—highlighting his infatuation, feuds, and fascination with science and the mountebanks, mystics, and experimenters of his time
« Back