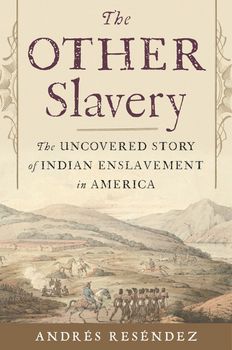 The Other Slavery: The Uncovered Story of Indian Enslavement in America

Since the time of Columbus, Indian slavery was illegal in much of the American continent. Yet, as historian Andrés Reséndez illuminates in The Other Slavery, it was practiced for centuries as an open secret. There was no abolitionist movement to protect the tens of thousands of natives who were kidnapped and enslaved by the conquistadors and later forced to serve as domestics for Mormons and rich Anglos, or to descend into the “mouth of hell” of eighteenth-century silver mines, where, if they didn't die quickly from cave-ins, they would die slowly from silica in their lungs.

Reséndez builds the incisive, original case that it was mass slavery, more than epidemics, that decimated Indian populations across North America. New evidence, including testimonies of courageous priests, rapacious merchants, Indian captives, and Anglo colonists, sheds light on Indian enslavement of other Indians. As what started as a European business passed into the hands of indigenous operators and spread like wildfire across vast tracts of the American Southwest.

The Other Slavery is nothing less than a key missing piece of American history, one that changes an entire national narrative.

A myth-shattering work that draws on new evidence to reveal the massive enslavement of tens of thousands of North American Indians, from its beginnings in the early 1500s to its last gasp in the late 1800s.