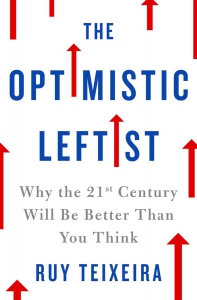 The Optimistic Leftist: Why the 21st Century Will Be Better Than You Think

The left is likely to dominate the 21st century, and there is little the right can do about this except adapt. This seems counter-intuitive in light of the modest success the left has enjoyed since the great financial crisis of 2008-09. Though Democrats have done well in recent presidential elections, progressives have found themselves unable to move their most important policies forward, suffering through an endless series of battles with a determined and extreme Republican party. This has only been exacerbated by stunning Republican gains in recent congressional elections.

But this short-sighted perspective overemphasizes the role of crisis and underestimates the role of long-term fundamental change. The Optimistic Leftist takes a look at the structural and economic shifts remaking advanced societies and shows that the left is in a far better position to advance its agenda than the right. Eventually, the right will be forced to play on the left’s terms to be competitive.

This is because only the left has growing, not declining, coalitional strength and only the left is willing to confront and solve capitalism’s “Piketty problem” (a vicious cycle of rising inequality, stagnating living standards and slowing economic growth) by building a new equitable-growth “opportunity state.”

A bold vision for a progressive century arguing that new coalitions of the left will achieve both exceptional material progress and greater social justice.