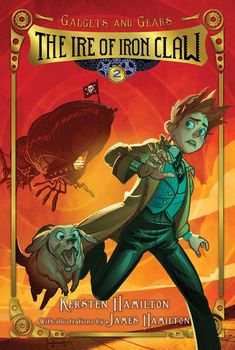 The Ire of Iron Claw: Gadgets and Gears, Book 2

The evil magicians called the Mesmers are still plotting to take over the world, and the Kennewicketts, recently recruited into the spy business by President Roosevelt, are at the centre of the battle for world domination. Now the Amazing Automated Inn has been compromised: someone is smuggling secrets out of the lab and selling them to unscrupulous sorts in Italy. Worse, their friend Nikola Tesla's latest invention - a device that will provide a limitless and free source of electrical power for all - has been sabotaged.

Will Willy, the noble boy scientist, and his daring dachshund, Noodles, be able to defeat the Mesmers and their minions a second time? Or will the darker side of the Kennewickett family line prevail?

In this second book of an inventive series filled with cool scientific details, the loyal dachshund Noodles, the boy inventor Wally Kennewickett, and his scientific genius family and staff of automatons join forces with Nikola Tesla to defeat sky pirates, cross Europe in a giant mechanical spider, and defy evil magicians.