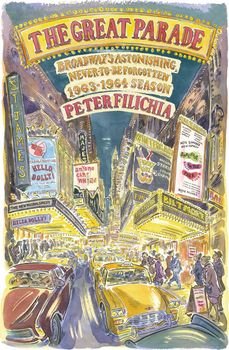 It was the Broadway season when Barbra Streisand demanded "Don’t Rain on My Parade" and Carol Channing heard the waiters at the Harmonia Gardens say "Hello, Dolly!" From June 1, 1963 through the final day of May 31, 1964, theatre goers were offered 68 different productions: 24 new plays, 15 new comedies, 14 new musicals, 5 revivals of plays, 3 revues, 3 plays in Yiddish, 2 in French, 1 double-bill and even 1 puppet show. Peter Filichia’s The Great Parade will look at what a Broadway season looked like a half-century ago analysing the hits, the flops, the trends, the surprises, the disappointments, the stars and even how the assassination of JFK and the arrival of the Beatles affected Broadway. The Great Parade is a chronicle of a Broadway season unprecedented in the star power onstage: Barbara Streisand, Carol Channing, Claudette Colbert. Colleen Dewhurst, Hal Holbrook, Mary Martin, Christopher Plummer, Robert Preston, Julie Harris, Jason Robards, Jr., Carol Burnett, Tallulah Bankhead, Alec Guinness, Kirk Douglas, Albert Finney, Paul Newman, Joanne Woodward, Richard Burton, Mary Martin, Beatrice Lillie, Hermione Gingold, Robert Redford and many more. Neil Simon and Stephen Sondheim burst on to the Broadway stage with Barefoot in the Park and Anyone Can Whistle. The ’63-’64 season was one of Broadway’s greatest and in The Great Parade, Peter Filichia gives us another classic.

A chronicle of Broadway’s greatest season when stars like Claudette Colbert and Robert Redford trod the boards with Barbara Streisand in “Funny Girl” and Carol Channing in “Hello, Dolly!”