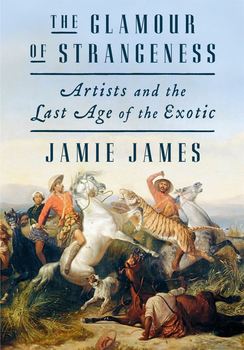 The Glamour of Strangeness: Artists and the Last Age of the Exotic

Focusing on six principal subjects, Jamie James locates "a lost national school" of artists who left their homes for the unknown. There is Walter Spies, the devastatingly handsome German painter who remade his life in Bali; Raden Saleh, the Javanese painter who found fame in Europe; Isabelle Eberhardt, a Russian-Swiss writer who roamed the Sahara dressed as an Arab man; the American experimental filmmaker Maya Deren, who went to Haiti and became a committed follower of voodoo. From France, Paul Gauguin left for Tahiti; and Victor Segalen, a naval doctor, poet, and novelist, immersed himself in classical Chinese civilization in imperial Peking. In The Glamour of Strangeness, James evokes these extraordinary lives in portraits that bring the transcultural artist into sharp relief. Drawing on his own career as a travel writer and years of archival research uncovering previously unpublished letters and journals, James creates a penetrating study of the powerful connection between art and the exotic.Jamie James is the author of The Music of the Spheres, The Snake Charmer, Rimbaud in Java, and other titles. He has contributed to The New York Times, The Wall Street Journal, Vanity Fair, and National Geographic Traveler, among others, and served as the art critic at The New Yorker and The Times of London. He moved to Indonesia in 1999.

The singular lives of artists whose identities are forged by the exotic From the early days of steamship travel, artists stifled by the culture of their homelands fled to islands, jungles, and deserts in search of new creative and emotional frontiers. Their flight inspired a unique body of work that doesn't fit squarely within the Western canon, yet may be some of the most original statements we have about the range and depth of the artistic imagination.