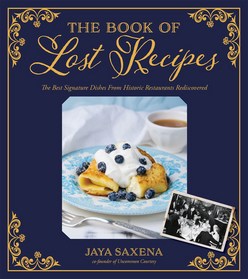 The Book of Lost Recipes: The Best Signature Dishes From Historic Restaurants Rediscovered

Jaya Saxena takes readers on a tour around the country, into some of the once most popular restaurants in America to discuss the history and how-to's of their most infamous dishes. It is sort of vintage meets foodie.

In their heyday, the legendary restaurants profiled by The Book of Lost Recipes were frequented by celebrity clientele and served food that became institutions of the American restaurant landscape, many of which are still reminisced about by those who had the opportunity to experience their cuisines. Read the stories of some of the most legendary restaurants in America and follow the recipes to recreate their most celebrated dishes. Depart from New York's Moskowitz & Lupowitz after learning all about their M & L Chopped Liver, of course, to Horn & Hardart Automat in Philadelphia to find out the secrets behind their Fried Fish Cakes and Famous Baked Beans. Discover the story behind the Blintzes at Ashkenaz's Deli in Chicago to Paoli's Baked Canneloni in San Francisco.

Take a step back in history to visit some of the most iconic restaurants in America and learn to make the dishes that helped re-shape the industry forever.

A contributor to Serious Eats and Gothamist made it her mission to dig up the best and vintage recipes from glamorous and now defunct restaurants in this nostalgic celebration of great food.