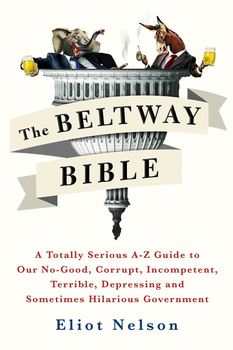 How is legislation crafted? How so you lose an election? What do “bundler,” “quorum call” and “omnibus” mean? Why do some of the White House’s most important meetings occur at an outpost of Caribou Coffee? Why should you want to have a Jumbo Slice at 3:00 AM on any given early morning, if you are an ambitious staffer on The Hill.? What, exactly, is a “skintern?” Eliot Nelson, one of Washington’s funniest and most admired young journalists, knows how the sausage factory works and his new book, The Beltway Bible, is every American’s must-have owner’s manual to the high and low points of our esteemed government. Arranged from A-Z, The Beltway Bible will look at politics and government from an insider’s perch breaking the bureaucracy into easily-digested entries on fundamental subjects like how legislation is formed, the scope of the president’s power and an overview of primary federal agencies. Eliot also looks at those less-well-known power structures in D.C. that trade in buffoonery and shenanigans: the internal pecking order of White House aides, the high school cafeteria power struggles inside the president’s cabinet and the petty congressional arguments over how highway on-ramps are named. The Beltway Bible makes our complex government accessible in a way that will please everyone from Jon Stewart to John Doe. Eliot Nelson’s The Beltway Bible is tailor-made for Election 2016.