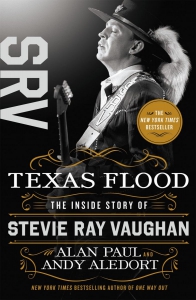 Texas Flood: The Inside Story of Stevie Ray Vaughan

Description
A clean and sober Stevie Ray Vaughan seemed poised for a new, limitless chapter of his life and career just a few years after his severe addiction to cocaine and alcohol almost killed him. Years of sibling rivalry with big brother Jimmie, his first and greatest musical hero, were behind him, and their first collaborative album was complete and on the verge of being released. His tumultuous marriage was over and he was deeply in love with a supportive, creative woman. His last album had been his most successful, both critically and commercially. Instead, it all came screeching to a sudden end, when Vaughan was killed in a helicopter crash on August 27, 1990, after that evening’s dynamic performance with Eric Clapton, leaving an endless stream of what-ifs. He was just 35 years old. In the ensuing 28 years, Vaughan’s legend and acclaim have only grown; he is an international musical icon. Despite the cinematic scope of Vaughan’s life and death, there has never been a truly proper accounting of his story. Until now. Texas Flood provides the unadulterated facts about Stevie Ray Vaughan from those who were with him throughout every stage of his life and career and who knew him best: his brother Jimmie, his Double Trouble bandmates Tommy Shannon, Chris Layton and Reese Wynans, and many other close friends, girlfriends, fellow musicians, crew members and managers.
Previous Titles
Texas Flood 9781250142832 (HB), One Way Out 9781250040497 (HB), 9781250040503 (PB)
Selling Points
The New York Times bestselling biography of guitar legend Stevie Ray Vaughan, with an epilogue by Jimmie Vaughan.
« Back