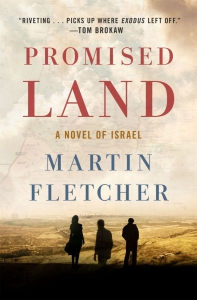 Description
The tumultuous early years of the young Jewish state are brought to vivid life through the eyes of two German Jewish brothers. Arie survived the Holocaust in Europe. Peter, one year older, was sent to America before the war began. They find each other again in Israel, learning everyone else in their family has been murdered. Peter becomes a top Mossad agent, deeply involved in many of the key spy adventures of the era. Arie becomes a scheming businessman, among the richest men in Israel: one brother is building the state, the other protecting it. But they have fallen in love with the same woman, a Jewish refugee from Egypt. The brothers’ jealousies and intrigues are mirrored by the young nation's very own struggles to survive.
Selling Points
An epic saga of Israel's early years, that Tom Brokaw calls,'a riveting novel that picks up where Exodus left off.' The first novel in a planned trilogy.
« Back