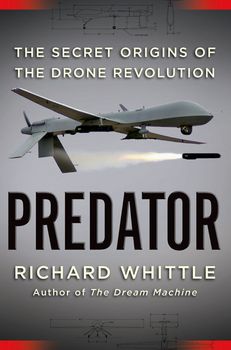 Predator: The Secret Origins of the Drone Revolution

The creation of the first weapon in history whose operators can stalk and kill an enemy on the other side of the globe was far more than clever engineering. As Richard Whittle shows in Predator, it was one of the most profound developments in the history of military and aerospace technology.

Once considered fragile toys, drones were long thought to be of limited utility. The Predator itself was resisted at nearly every turn by the military establishment, but a few iconoclasts refused to see this new technology smothered at birth. The remarkable cast of characters responsible for developing the Predator includes a former Israeli inventor who turned his Los Angeles garage into a drone laboratory, two billionaire brothers marketing a futuristic weapon to help combat Communism, a pair of fighter pilots willing to buck their white-scarf fraternity, a cunning Pentagon operator nicknamed “Snake,” and a secretive Air Force organization known as Big Safari. When an Air Force team unleashed the first lethal drone strikes in 2001 for the CIA, the military’s view of drones changed nearly overnight.

Based on five years of research and hundreds of interviews, Predator reveals the dramatic inside story of the creation of a revolutionary weapon that forever changed the way we wage war and opened the door to a new age in aviation.

The untold story of the birth of the Predator drone, a wonder weapon that transformed the American military, reshaped modern warfare, and sparked a revolution in aviation