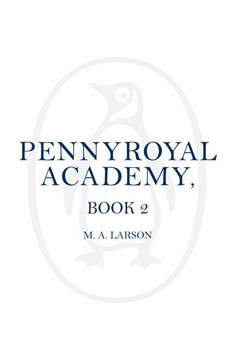 When Princess Cadet Evie returns to Pennyroyal Academy, she’s suddenly become famous. Word has traveled far and wide of her defeating the witches and has inspired a wave of new recruits to the Academy. Though flattering, the unexpected attention is overwhelming for Evie, and amidst the piles and piles of fan mail, she finds a letter with an ominous threat. A secret society has come out of the shadows with a wicked plan, putting the Academy in great peril. This new enemy has powers impervious to the princess’s magic - posing a new risk to Evie and her friends. The danger looms even larger when Evie discovers someone close to the Academy may not be who they seem. It’s up to Evie and her friends to uncover the devious plot and save their once venerable Academy before it’s too late.

This sequel to the beloved, critically-acclaimed Pennyroyal Academy promises middle-grade readers even more adventure and suspense.

Perfect for fans of The School for Good and Evil comes the eagerly anticipated follow-up to M. A. Larson’s Pennyroyal Academy, hailed by the New York Times as a “breathtakingly exciting novel” with a heroine who “deserves a special place in a new pantheon of capable, feisty and, yes, admirable literary princesses.”