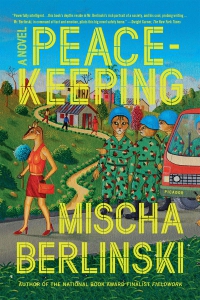 When Terry White, a former deputy sheriff and a failed politician, goes broke in the 2007-2008 financial crisis, he takes a job working for the UN, helping to train the Haitian police. He's sent to the remote town of Jérémie, where there are more coffin makers than restaurants, more donkeys than cars, and the dirt roads all slope down sooner or later to the postcard sea. Terry is swept up in the town's complex politics when he befriends an earnest, reforming American-educated judge. Soon he convinces the judge to oppose the corrupt but charismatic Sénateur Maxim Bayard in an upcoming election. When Terry falls in love with the judge's wife, the electoral drama threatens to become a disaster.

Tense, atmospheric, tightly plotted, and surprisingly funny, Peacekeeping confirms Berlinski's gifts as a storyteller, exploring a part of the world that we neither understand nor control.

“[Berlinski] is a kind of heir to Graham Greene and Robert Stone, both for his excellent storytelling and for the way it can reveal a bigger picture" (Kirkus Reviews, starred).

Previous Titles
FIELDWORK ISBN (Hardback) 9780374299163 and (Paperback) 9780312427467
Selling Points
The highly anticipated second novel from the National Book Award nominated author with a fan base as broad as Stephen King and Hilary Mantel.
« Back