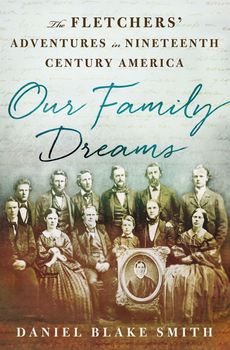 Our Family Dreams: The Fletchers' Adventures in Nineteenth-Century America

In this novel like narrative, Daniel Blake Smith vividly brings to life the Fletchers, a family of loving, ambitious, and at times insecure pioneers who scattered across the vast expanse of post-revolutionary America, keeping in touch through letters despite their wildly different life paths. On a hard scrabble farm in Vermont, the patriarch, Jesse Fletcher, struggled with debt and depression but managed to educate his children, especially his son Elijah, a Yankee who moved to Virginia and was shocked by the horrors of slavery, but later seduced by the plantation lifestyle. Another son, Calvin, left at age 17 for Indianapolis to become a self-made lawyer, banker, and a prominent citizen and passionate abolitionist. The grandchildren include Indiana, a women's education activist who donated her home to create Sweet Briar College; black sheep Lucian, who went to California to join in the gold rush; and physician Billy captured as a spy during the Civil War.

Through letters and diaries, we find that the Fletchers appear surprisingly similar to us; they dream, fret, fight, and love. Despite numerous heartaches and setbacks, their spirits of enterprise, sacrifice, mobility, and education endure as American values to this day.

An intimate, novel look into the hearts and minds of one 19th century American clan.

In the early years after the Revolution, Americans sought to establish a new way of life. More than the church, school, or courthouse, it was the family that nurtured the American Dream.