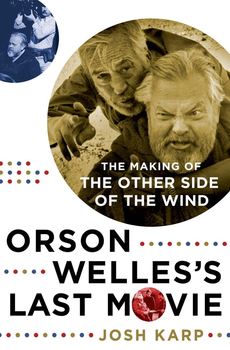 Orson Welles's Last Movie: The Making of The Other Side of the Wind

Watch...Welles attempt to create a Citizen Kane-like masterpiece that will restore his career.

See...Welles at his most Wellesian: clever, crazed; masterful, maniacal; kind, cruel; enlightened, enraged; in command and out of control.

Running Time: A two-hour movie...about a single day... that was supposed to shoot in eight weeks...but took six years to complete...and remains unreleased forty years later. Tied up for years in convoluted negotiations and complicated legal wrangling, the partially edited film has been seen by only a handful of people. Some believe it's a lost masterpiece; others find it completely unfathomable.

Orson Welles's Last Movie is an account of the strange, remarkable, and often brilliant production of what has been called "the greatest home movie that no one has ever seen." It's the story of a film that began with art imitating life and morphed into a tale of life imitating art -- best described by its star, John Huston, as "an adventure shared by desperate men that finally came to nothing."

A behind the scenes account of the making of Orson Welles's ill-fated comeback movie "The Other Side of the Wind."