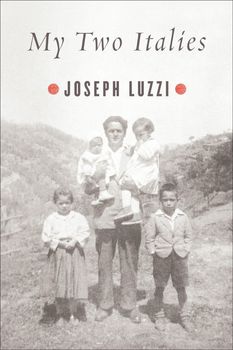 The child of Italian immigrants and an award-winning scholar of Italian literature, Joseph Luzzi straddles these two perspectives in My Two Italies to link his family's dramatic story to Italy's north-south divide, its quest for a unifying language, and its passion for art, food, and family. From his Calabrian father's time as a military internee in Nazi Germany—where he had a love affair with a local Bavarian woman—to his adventures amid the Renaissance splendour of Florence, Luzzi creates a deeply personal portrait of Italy that leaps past facile clichés about Mafia madness and Tuscan sun therapy. He delves instead into why Italian Americans have such a complicated relationship with the "old country," and how Italy produces some of the world's most astonishing art while suffering from corruption, political fragmentation, and an enfeebled civil society.

With topics ranging from the pervasive force of Dante's poetry to the meteoric rise of Silvio Berlusconi, Luzzi presents the Italians in all their glory and squalor, relating the problems that plague Italy today to the country's ancient roots. He shares how his "two Italies"—the earthy southern Italian world of his immigrant childhood and the refined northern Italian realm of his professional life—join and clash in unexpected ways that continue to enchant the many millions who are either connected to Italy by ancestry or bound to it by love.

A charming, informative personal history that blends the anecdotal, historical, and downright unusual