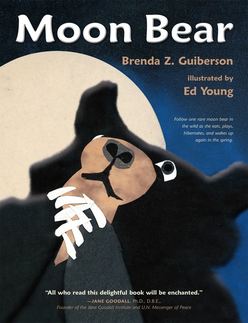 Moon bears, or Asiatic black bears, are named for the white moon shaped blaze on their chests. Moon bears are seldom seen but their footprints, claw marks, hair, and bear nests high in the trees give us clues about how they live. Sadly, there are now more moon bears in captivity than in the wild, as these animals are being "farmed" for their commercially valuable bile.

Brenda Guiberson's lyrical text and Ed Young's stunning illustrations combine in a winning tribute to this endangered species. Follow one moon bear in the wild as she eats, plays, hibernates, and wakes up again in spring.

In this lyrical celebration of the moon bear, a female forages in summer, hibernates in winter, and emerges from her den in springtime with her three baby cubs.

"This is a beautiful book which I hope can spread awareness until every last bear is free." - Olivia Newton-John