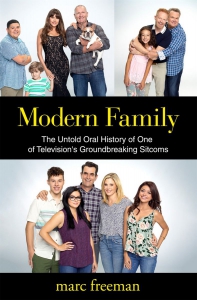 Modern Family: The Untold Oral History of One of Television's Groundbreaking Sitcoms

Description
Since premiering in 2009, the hit television sitcom Modern Family has garnered tens of millions of devoted fans and earned 75 Emmy nominations and 22 Emmy Awards, including five in a row for Best Comedy Series. Professors have written about it. Psychologists have lectured on it. The New York Times and the Washington Post have analyzed the characters and plotlines. If you added up all the viewers for all the episodes, the number would comfortably stretch past one billion. As much as people love the show, few know its origins. How did a kernel of an idea by Emmy-winning writers Levitan and Lloyd morph into a television juggernaut? Where did they find the cast? How did they come up with story ideas? What went on behind the scenes? Modern Family: The Untold Oral History of One of Television's Groundbreaking Sitcoms is the only major book on this show. It comes with full participation from cast and crew, and details the origins of the story from Levitan and Lloyd. Casting director Jeff Greenberg shares his memories about the trials and tribulations of choosing the perfect cast. Cast members give their impressions from their first table read through the last day on set.
Selling Points
An oral history, with the full participation of cast and crew, of one of the most popular sitcoms in television history.
« Back