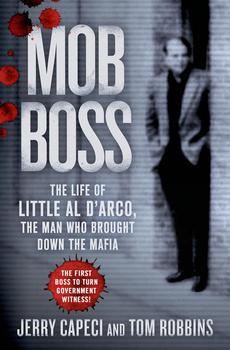 Mob Boss: The Life of Little Al D'Arco, the Man Who Brought Down the Mafia

As top boss of the Luchese crime family, Alfonso "Little Al" D'Arco was the highest-ranking mobster to ever share Mafia secrets when he changed sides in 1991. His testimony sent more than fifty mobsters to prison, and prompted others to make the same choice, including John Gotti's top aide, Salvatore "Sammy Bull" Gravano.

Yet up until the day he renounced the mob, Al D'Arco lived and breathed the old-school gangster lessons he learned growing up on the streets of Little Italy. But after he narrowly escaping an assassination attempt, D'Arco decided to quit the mob. Taking the family down as he left, some of the spilled secrets are: One of New York's most famous pizza parlours, Ray's Pizza, was a major Mafia centre for multi-million-dollar heroin deals; A pair of Mafia hitmen carried out dozens of murders dressed as women, including one hit inside a funeral limousine wearing a black dress and veil; Crazy Joe Gallo planned to kidnap the son of newsman Jimmy Breslin as revenge for Breslin's mocking novel, "The Gang That Couldn't Shoot Straight" about Gallo.

With the full participation of D'Arco, New York reporters Jerry Capeci and Tom Robbins detail a New York dominated by strutting gangland personalities in this riveting narrative that takes readers behind the famous witness testimony for a comprehensive look at the Mafia in New York City.