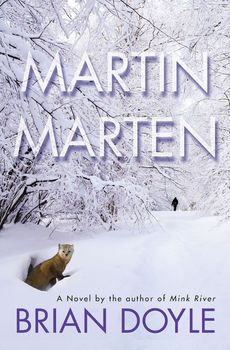 Dave is fourteen years old, living with his family in a cabin on Oregon's Mount Hood (or as Dave prefers to call it, like the Native Americans once did, Wy'east). He is entering high school, adulthood on the horizon not far off in distance, and contemplating a future away from his mother, father, and his precocious younger sister.

And Dave is not the only one approaching adulthood and its freedoms on Wy'east that summer. Martin, a pine marten (a small animal of the deep woods, of the otter/mink family), is leaving his own mother and siblings and setting off on his own as well. As Martin and Dave's paths cross on forest trails and rocky mountaintops, they—and we—witness the full, unknowable breadth and vast sweep of life, and the awe-inspiring interconnectedness of the world and its many inhabitants, human and otherwise.

Martin Marten is a coming-of-age tale like no other, told in Brian Doyle's joyous, rollicking style.

Brian Doyle’s writing is driven by his passion for the human, touchable, daily life, and equally for the untouchable mystery of all else. Mary Oliver, Pulitzer Prize-winning author.