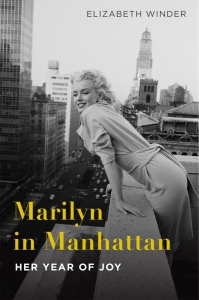 Marilyn in Manhattan: Her Year of Joy

In Manhattan, the most famous woman in the world can wander the streets unbothered, spend hours at the Met getting lost in art, and afternoons buried in the stacks of the Strand. Marilyn begins to live a life of the mind in New York; she dates Arthur Miller, dances with Truman Capote and drinks with Carson McCullers. Even though she had never lived there before, in New York, Marilyn is home.

In Marilyn in Manhattan, the iconic blonde bombshell is not only happy, but successful. She takes classes with Lee Strasberg at the Actors Studio, befriends the greatest actors and writers of her day and most importantly she breaks her contract with Fox Studios to form her own production company, a groundbreaking move that makes her the highest paid actress in history and revolutionises the entertainment industry.

Elizabeth Winder has been widely praised for her portrayal of Sylvia Plath, and here she brings to life the most famous actress of all time in a portrait of the artist that is as breathtaking and beautiful as the woman herself. A true love letter to Marilyn, and a joyous portrait of a city bursting with life and art, Marilyn in Manhattan is a lively look at two American treasures: New York and Marilyn Monroe.

Selling Points
Marilyn, Like You've Never Seen Her Before.
« Back