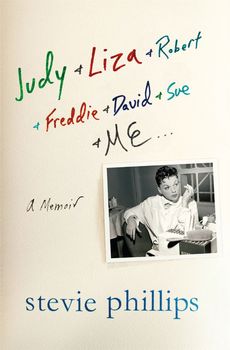 No star burned more ferociously than Judy Garland. And nobody witnessed Garland's ferocious talent at closer range than Stevie Phillips. During the "Mad Men" era, Stevie Philips was a young woman muscling her way into the manscape of Manhattan's glittering office towers. After a stint as a secretary, she began working for the legendary duo of Freddie Fields and David Begelman at MCA under the glare of Lew Wasserman.When MCA blew apart, Fields and Begelman created CMA and Stevie went along. Fields convinced Garland to come on board and Stevie became, as she puts it, "Garland's shadow", putting out fires - figurative and literal - in order to get her to the next concert in the next down-and-out town. Philips paints a portrait of Garland at the bitter end and, though it was at times a nightmare, Philips says "She became my teacher" teaching her "how to" and "how not to" live. Stevie represented her fiercely talented daughter Liza Minnelli, Robert Redford, Paul Newman, Henry Fonda, George Roy Hill, Bob Fosse, Cat Stevens, and David Bowie. She produced films and Broadway shows, had a disastrous affair with Begelman and counted her colleague, the legendary agent Sue Mengers, among her closest confidantes. And, now she tells the whole story in Judy and Liza and Robert and Freddie and David and Sue and Me a tough-talking memoir by a woman who worked with some of the biggest names in show business. It's a helluva ride.

The woman who took care of Judy Garland, held Liza Minnelli's wedding to Peter Allen in her living room and dealt with Burt Reynolds as well as many other celebrities tells all…