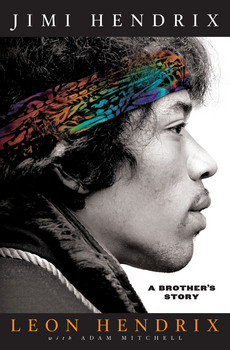 In this intimate depiction, Leon vividly recounts Jimi’s tough childhood in Seattle, and his amazing rise to fame. From Jimi’s experimentation with the sound and vibration of plucking wires attached to the posts of their brass bed to the moment he picked up his first stringed instrument, this is a fresh and intimate look at an enduring icon from the brother who was there from the beginning.

Leon sheds light on the origin and meaning of classic Hendrix tunes, which Jimi would play for his brother over the phone as he wrote them on the road. He also chronicles the complicated Hendrix family dynamic, the culture of sex and drugs that came with Jimi's stardom, and his tragic death. In time for what would have been Jimi's 70th birthday in 2012, this captivating account sheds new light on rock and roll's genuine legend.

LEON HENDRIX lives in Los Angeles and is pursuing his art and music full-time in the Leon Hendrix Band. In addition to touring across North America and Europe, he is also the owner of Rockin Artwork LLC, a company that licenses Jimi Hendrix's likeness and image.

In this revealing and vividly candid memoir, Jimi's younger brother, Leon, sets the record straight on the life of this musical icon