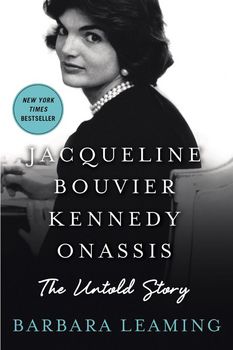 For almost six decades, Jacqueline Kennedy Onassis has fascinated people worldwide. The subject of numerous books and thousands of articles, her life has probably been documented in millions of words. And yet, there has always remained something mysterious, something private about this very public woman.

With extraordinary skill and great sensitivity, Barbara Leaming explores the seemingly magical world of Jackie's youth, her fairy-tale marriage to a wealthy and handsome Senator and Presidential candidate and her astonishing transformation into a deft political wife and unique First Lady. This spirited young woman's rejection of the idea of a "safe marriage" as the wife of some socially prominent but utterly predictable man led her to JFK and international fame. But the trauma of her husband's murder, which left her literally soaked in blood and brains, would damage her far more than has been known. Until now.

This is the first book to document Jackie's brutal, lonely and valiant thirty one year struggle with post-traumatic stress disorder (PTSD). In heartrending detail, we witness a struggle that unfolded at times before our own eyes, but which we failed to understand. While the life of Jacqueline Kennedy Onassis has been examined and scrutinized countless times, it is only now that we can truly discover the woman behind the facade, the untold story of this iconic woman.

The New York Times and USA Today bestseller that "offers a startling and fascinating look at Jackie's life." Richmond Times-Dispatch