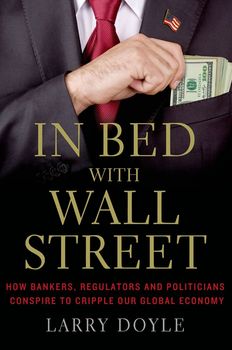 In Bed with Wall Street: How Bankers, Regulators and Politicians Conspire to Cripple Our Global Economy

The 2008 financial crisis brought the US to its knees, and spawned nationwide protests against the lack of regulation facing Wall Street. But the average American still fails to grasp what was—and still is—happening: that the inmates continue to run the asylum. Doyle has been tracking this story for years, and exposes here how Wall Street, politicians, and regulators themselves have conspired for personal and industry-wide gains while failing to protect investors, consumers, and the American public. He details the corrupt nature of the financial police, who are little more than meter maids imposing fines that amount to nothing more than a slap on the wrist.

Doyle exposes the revolving door of Wall Street, wherein the regulators are all former or future employees of the firms they're tasked with overseeing, and how they routinely serve the interests of the industry itself rather than protecting investors and markets. Recent bombshells—such as multi-billion dollar trading losses at JP Morgan, the manipulation of interest rates via the LIBOR scandal, and money laundering with drug cartels and rogue nations such as Iran—are symptomatic of this corrosive culture and the lack of trust in the system. As the big banks fight to avoid real reforms that would protect the economy, this book is a timely, important, and shocking look inside the Washington-Wall Street conspiracy crippling America and the global economy.

A look under the sheets at the incestuous relationship between Wall Street, Washington, and the regulators who are supposed to protect the rest of us