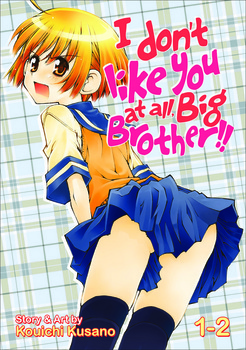 Junior High School student Takanashi Shuusuke has a problem. His childhood friend Iroha has returned with a massive crush on him. And so does class president (and yaoi fanatic), Mayuka. While Shuusuke must choose between them, his biggest problem is his younger, adopted sister Nao, who has become jealously possessive of him. As all three girls vie for Shuusuke’s attention, he soon learns that all is fair in love and war!

Kusano Kouichi, is the author/artist of "I Don't Like You At All, Big Brother!! "